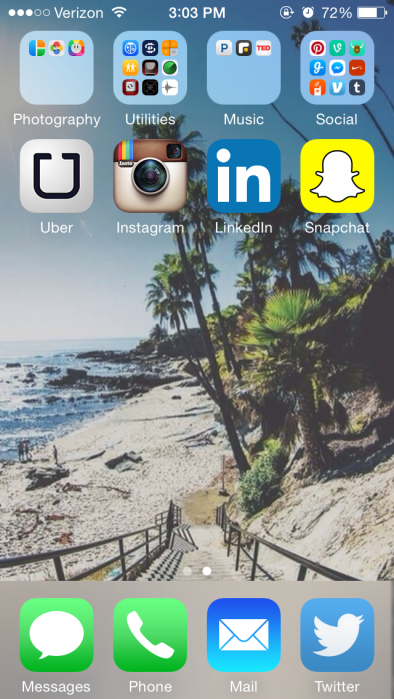 Today, I dug around my things to find multimodal texts. The following is a list of some of the most interesting ones I found:

The first thing I noticed when digging through my multimodal texts–especially the digital texts– was that I had already prearranged a lot of them into different categories without even realizing that I had done it. For example, it you take a look at the snapshot of my phone screen, you will seen I use different folders to separate different applications. I have folders that include “Photography,” “Utilities,” “Music,” and “Social.” Some of the main multimodal texts that I use most frequently, including Uber, Instagram, LinkedIn and Snapchat, I do not place into folders so that I have easier, faster access to them. In addition to my digital modes of text from my phone and laptop, I also had one Five Star 3-Subject notebook and a Camelbak water bottle in my backpack. Unlike my digital modes of text, these were more simple and served very basic purposes.

The most similar multimodal texts that I found across different devices, including my phone and laptop, were programs or applications that focused on design and visuals. Those similar programs included Adobe Creative Suite, Snapchat, Instagram, and Pinterest. All of these programs focus on the use of images presented in different ways to portray messages. The two most different multimodal digital texts were probably Pandora and Uber. Both stood apart from all my other texts just due to the fact that their uses were so specified. Pandora is focused on streaming music, while Uber’s main use is to provide a platform for finding rides and local taxi’s in the area. Of course my non-digital forms of text, my notebook and water bottle, were also very different because they are objects I could physically hold and interact with, while all of the digital modes of text you could only interact with visually.

The main aspect that I took away from today’s dig was that the each multimodal text has the ability to overlap in modes in order to achieve their desired usage and purpose, with some being more complex or simple than others.